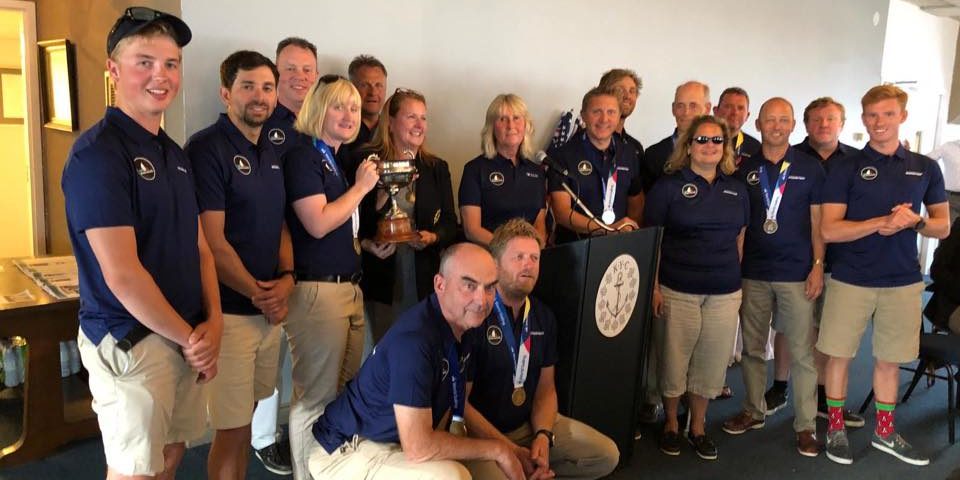 I came back last week from the Blind Sailing Fleet Racing World Championships in Canada. The competition was held at the Kingston Yacht Club in Ontario. I had a great week, participating in some exciting and very challenging races. I was skipper and helm of a B1 category boat, competing against teams from the USA, Canada, Australia and France, as well as another GB boat.

GB also had boats in the B2 and B3 categories, and I am really happy and proud to say that GB won the Squadron Cup, meaning that we successfully defended our world title from 2 years ago!

It was a week of very close fought races, with boats constantly changing position as the week went on. Here are some extracts from the daily reports of the racing and our team reports, so you can get a feel for what it was like!

It’s day one, and the team are set to start racing today, after a warm opening ceremony. The regatta will be sailed in the International Shark 24 class yachts, a boat that is new to all the GBR team and many of the other countries.

The racing area is in Kingston Harbour, with two short days of practice in the area of racing. No matter the age, sailing skills within a team take time and dedication. This year GBR has their youngest volunteer, Will Morris. Will is 16 and has been volunteering since the age of 14 for Blind Sailing. Alongside Will, we have a breadth of sighted volunteers, with some providing over 20 years of volunteering to Blind Sailing.

Before arriving in Canada the team had an idea of what the predominant wind direction (SW-SSW) on Lake Ontario would be. Day one didn’t disappoint with the wind increasing and shifting around to the South West direction. Throughout the day conditions become more challenging and exciting. As the afternoon progressed the wind speed carried on increasing. Typical Lake Ontario conditions… wave height increasing with the winds continuing to build in strength.

We didn’t impress anyone with our first couple of races. All the local knowledge we had managed to obtain said the wind would go left. We went left, it went right! Tough! But with good team spirit we looked at our day and got set for the second day of racing. 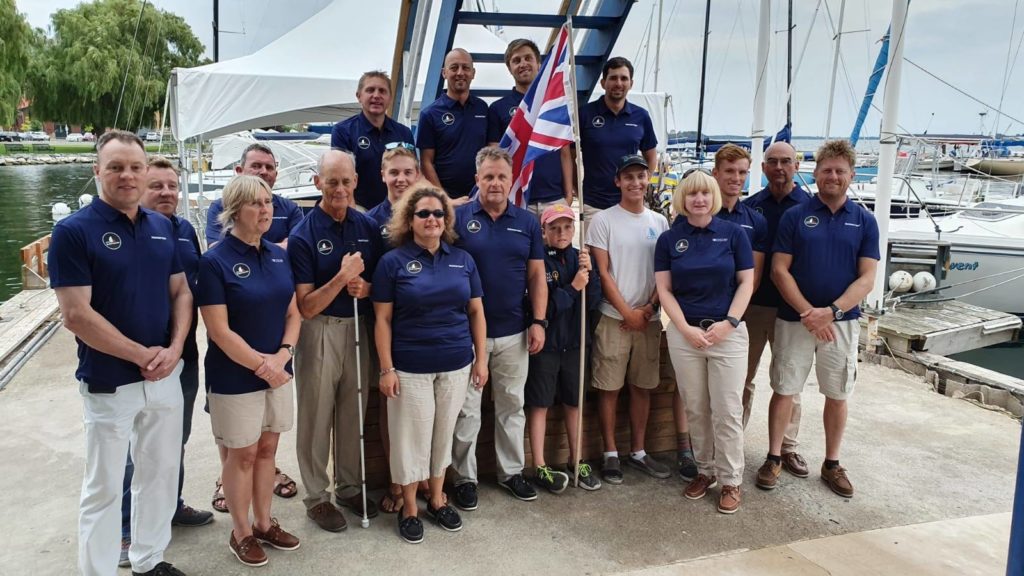 Day 2 saw better breeze early in the morning with a forecasted drop in pressure for the afternoon racing. With our team’s determination, we took to the water and made better decisions with strong teamwork. Our first two races saw us take a third and a second. For the final race of the day the wind stayed steady and we had a solid start, seeing us in second. But then there was an incident between Canada and France, with Canada hitting France. This saw France lose sight of where they were and they t-boned into the side of us, seeing Colin get trapped with a badly bruised leg. We carried on racing and took a sixth. With a strong second day we had moved up two places. Colin said “This is a tough fleet, we knew that, we went in at the deep end, but we are starting to find our feet! Very close racing, one mistake and you can be at the back! Tiring, yes, frustrating, oh yes, hearth thumping, you bet, exciting, definitely, fun, absolutely! Bring on tomorrow!”

Day 3 was a challenging day for all competitors. With a storm during the night, teams woke up to a fresh 20-25 knot South Westerly – true surfing conditions for the Shark 24s. Before the first race started while Will was helming downwind, a huge gust caused an involuntary jibe, resulting in the main sheet hitting Will across the face. The principal race officer ordered us ashore over the radio to have him checked, advising that he would give us redress for that race. The protest committee decided he didn’t have that authority and we were credited with a DNS. Gary Butler kindly stepped in for the only other race for the B1s, which started well, winning the pin end and getting the first shift. We couldn’t get the boat to track well on port tack, although starboard was fine. We dropped back on the long port tack but still managed to round in third place which we held to the end. Difficult conditions but we look forward to the next day of racing. 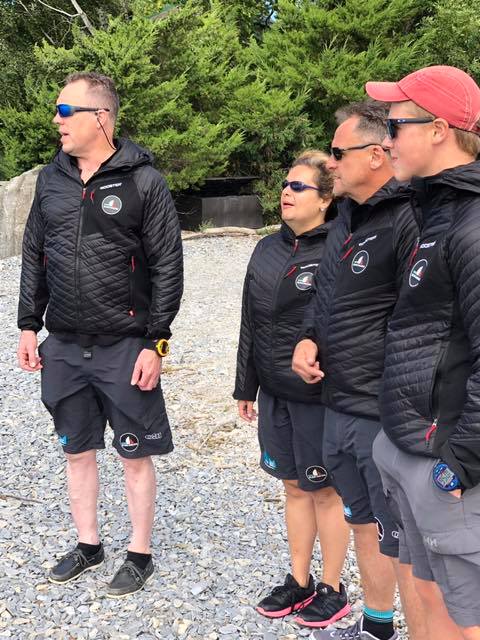 On day 4 we started well, but only a short way into the race our traveller disintegrated and with no way to control the main sheet we had to retire. Another opportunity lost. We sailed in, changed into the spare boat and just made it back in time for the second race. With no time to acclimatise to the new equipment we only managed a fifth. However, we felt confident for the third race, had a good start again and worked our way up the right side of the course to round in first place. Still in the lead at the bottom mark we had lined up the right hand mark when the French boat, aiming for the left, decided the right was better and forced us to not only hit the mark but go the wrong side. First to last in seconds. It wasn’t much consolation that the French boat was disqualified. We can only hope for an incident free day tomorrow.

The final days of racing were mixed for all teams. After no racing on Day 5 due to lack of wind, day 6 looked promising with a more optimistic North Westerly building, but little did the teams know it was to be a test of all skills and calmness. This direction was one that the team had not come across so far during the regatta and brought with it a new set of challenges. Both B1 teams had been having a mix of results due to many reasons outside of their control. After a good clean start in the middle of the line in the first race of the day, we finished in third. The next race we came sixth, although not far behind the leaders. Another good start in the last race of the day earned us another third.

The final day was set to be a big day for the B1s. Everything could change at the top with only 1.8 points separating the first three boats. The final race was set to be a medalling race. Whatever order teams finished in would be the positions for the medals.

Alas, there was to be no final race. Winds fluctuating between 0 and 4 knots thwarted all attempts of the race committee to start a race. After five hours out on the water the gun was sounded and the boats returned. USA gold, Australia Silver and GBR Vicki Sheen, bronze.

We ended up in sixth place after a week of amazingly close racing. Thank you so much to my crew of Mark Austen, Will Morris and Colin Midgley, I am very proud to have raced with you and fought hard all week! Thank you also to everyone who has sponsored me and donated to make my participation possible, and to everyone behind the scenes who have done so much to make GB World Champions again! I’m very grateful to all of you. 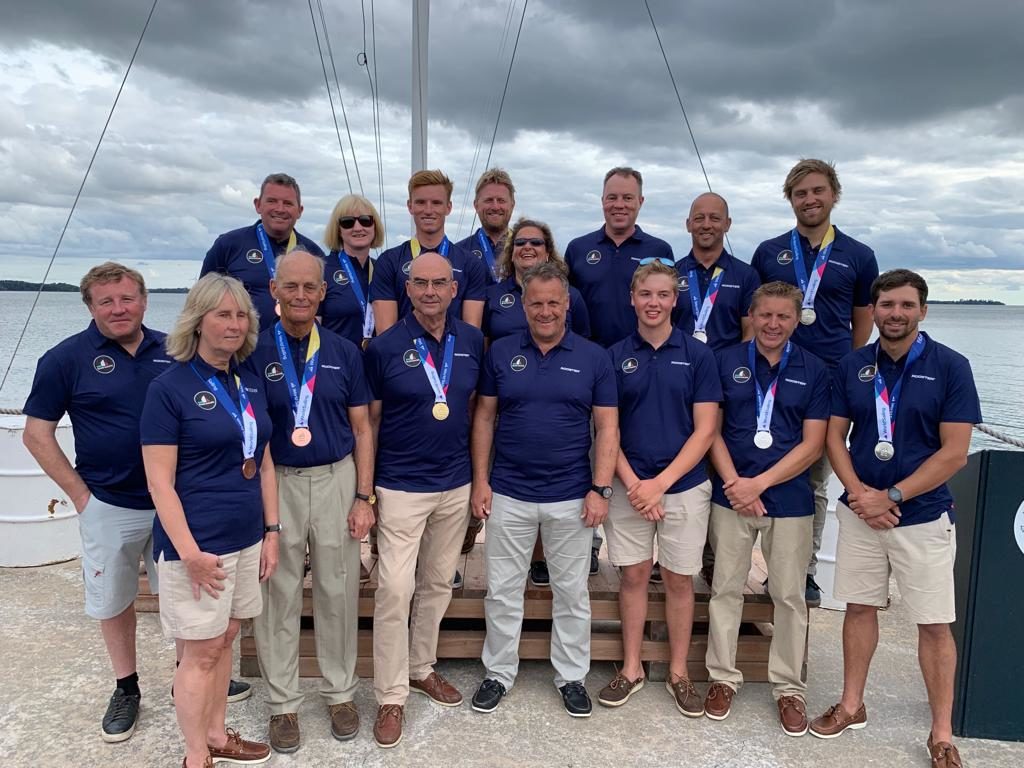